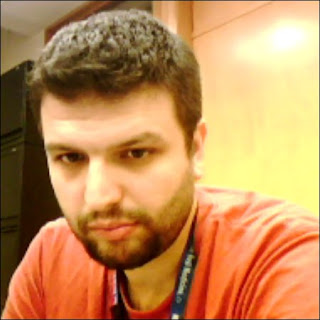 George S. Karagiannis was born in Thessaloniki, Greece in 1984. He finished the School of Veterinary Medicine and  obtained his PhD from the University of Toronto, Canada, in which he investigated molecular mechanisms of cancer metastasis. He is currently a cancer biology researcher at Albert Einstein College of Medicine in New York. His academic website can be accessed here. He is also involved with various forms of art, and his blog can be found here.

His work in literature balances between hard and soft science fiction, with elements of (new) weird, dystopian, apocalyptic/post-apocalyptic and time-to-time horror. Scarcely, he enjoys writing about more abstract/surreal or fantasy prose, which attempts to familiarize the readers with odd and unfriendly "dreamscapes". Topics of biology, molecular biology and medicine often inspire his plots and settings. His favorite science fiction author has been Philip K. Dick since he was first introduced in the field. Other authors he deeply appreciates are Isaac Asimov, Ursula LeGuin, Frederick Pohl, Poul Anderson, Arthur Clarke, Peter Hamilton, Brian Aldiss, China Mieville and James Alan Gardner.

He began writing at around mid-2011 and completed several flash and short story pieces, published in amateur and semi-professional magazines. Concepts of interest he likes to develop are the following: fundamentals and reasoning behind human behavior and emotions;  freedom-of-will versus destiny; the human is; the point-of-view as responsible for misinterpreting situations and causing fallacies; mass hysteria; peculiar and unconventional forms of alien invasion.